They were designed to make the fullest use of the GWR’s generous loading gauge, a legacy of broad gauge days, and so were much wider carriages at 9’7″ than the normal 9’0”. This did, though, mean there were restrictions to where they could run: their extra width would have meant they would have fouled, for instance, bridges and platforms where the loading gauge was less generous. Accordingly, these coaches had painted on each end: “Not to run over the Eastern and Western Valleys, North of Saltney Junction or between Littlemill Junction and Maindee Junction.”

The GWR’s answer to Pullman coaches, these were very luxurious coaches, each carrying a name after a member of the Royal Family, with free-standing armchairs arranged around tables hinged to the wall. A supplement of ten shillings (50p) on top of the first class fare was charged to travel in these carriages.

After the cessation of the ocean liner trains, they were used for private hire and Newbury Racecourse trains.

9111, King George, is owned by the South Devon Railway Association and arrived at Buckfastleigh straight from BR service in 1967. Sister 9116 Duchess of York is also on the SDR. 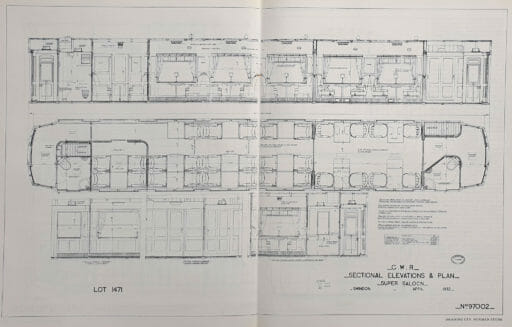